It has been awhile since I have given an update. There has been a major change of plans this Winter and Spring that I have been kind of keeping a secret.

This year I was hoping to go to various art shows and farmers markets around the U.P in the M35A2. However, an opportunity opened up for me to sell my products at a store on Washington Street in downtown Marquette. I also found that the M35A2 is beginning to have some rust issues and needs some preventative maintenance done before it can be used heavily. Therefore I am in the process of repainting the truck, changing fluids, filters, adjusting brakes, and greasing bearings. I have also been very busy building a massive dinning set for someone in my family. The dining set is made out of white pine and put together timber frame style with hand chiseled mortise and tenons. The table top is 5x10ft and 3 inches thick, and has two captains chairs at each end and two benches on the sides.

If you want to follow the progress of restoring the M35A2, I have a thread on Steel Soldiers detailing my build:  UPFINN’s M35A2 Build. It would take too much storage space to log the progress on the Metsami Creations website.

I have decided not to attend any art shows or farmers markets to keep my inventory up in anticipation for placing my products at a new store in downtown Marquette called the Flying Moose. I will also be a vendor at the Hiawatha Music Festival the weekend of July 18th. 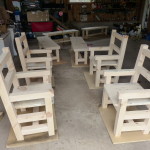 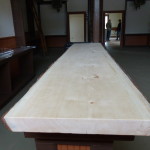 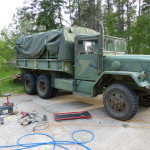 Many are wondering when I will set up my online store. I have decided to put it on hold due to the reason I will not be attending any shows, and that is inventory. I have completed all of my business paperwork, licensing, and financial accounts in preparation.

Right now I am trying to get the dining set and truck done at the same rate, as I would like deliver the table with it.

Thoughts on the Weather Ahead

The weather this May has featured mild temperatures and a dry start, with large amounts of rain to end the month. In the end of May we picked up around 5 inches of rain, enough to put a good dent in our developing drought and raising river levels higher than what was experiences during the Spring thaw in late March and early April. On thing for sure is that the green-up is several weeks earlier than last year, with all trees in leaf as of June 5th, but some time is needed before they reach full size. Memorial Day weekend was at the very end of May last year and the leaves were just coming out. This year, some leaves were coming out in early May, with some trees full of small leaves by mid May.

Although May 2015 has been overall warmer than normal, we have had some very cold nights. The weather pattern we have had over the Winter with the west coast ridge and east coast trough has persisted, although weakened significantly. As the jetstream becomes weaker in the warm season the wavelength shortens, and we get a trough over the Plains with a ridge on the west and east coast. There is also persistent cold and troughing over northeastern Canada. The Great Lakes area is stuck between the trough over the Plains and northeast Canada in a weak ridge resulting in mild weather, however when the troughs connect we get very heavy rainfall and anomalous cold. Behind the frontal passages during the last half of May is has gotten very cold, with temperatures at night falling to around 20F with snow showers even during the day!. If this pattern continues through the Summer, it is likely we would have another cold winter as eastern trough amplifies. However, the El Nino (warming of the central and eastern equatorial Pacific) is much stronger than last year, which might help a westerly flow develop bringing in mild and dry Pacific air during the Fall and Winter resulting in warmer temperatures and less snow compared to past Winters.

As for the frost and freeze, I expect a lot of the wild berry and fruit blossoms have been damaged due to the extreme cold in some areas. Around where I live there still seems to be a good amount of green blueberries and service berries, although it might be much worse in other areas. The choke cherries are just beginning to blossom, with most other fruit trees are in blossom or just finishing.

I did not make a Summer forecast yet, however for Upper Michigan I think we will have temperatures near normal with above normal precipitation. It will not be as cold as last Summer, but I do not expect there to be many heat waves either.

Last weekend I took a ride to my uncles place and cut up some northern white cedar poles. I thought they would be too small to mill, but I was able to get the slabbing rails to fit. I also had to put the logs between two boards to keep them steady. This system works good for cutting half logs and beams but I would not waste the wood cutting thinner boards.

You can see in the background how much the leaves came out during the end of May. 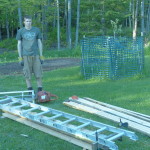 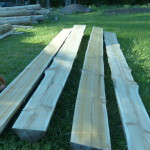 White cedar half logs I milled with the chainsaw 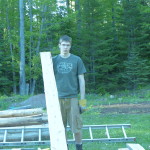 Here are some pictures of the process of cutting the mortise and tenons on the dining table project. I will do a full post later on the project when it is completed. 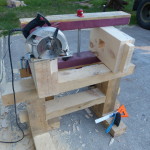 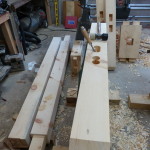 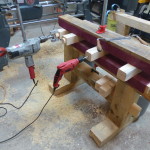 I have quite a few furniture and woodburning projects planned for the summer. Here are some of the interesting lumber pieces and stumps that will be used in my work. I cut, hauled, milled, and dried everything myself. 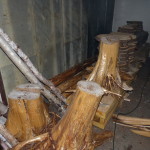 Various slabs, stumps, and posts drying in the kiln 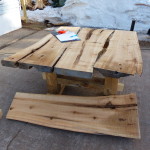 One hundred year old white cedar timber that I milled